Extruders, also known as mixing rooms, are used by manufacturers to produce a variety of rubber-like compounds, which are made by blending rubber-like compounds with different mixtures according to a custom formulation. For example, a particular formulation contains EPDM-like rubber materials, carbon black, plasticizers, coloring, oils, and curing grades. In the subsequent mixing process, contaminants or impurities are also likely to be introduced into the process system when all these different components are mixed in the processor. These pollutants will not only pollute the rubber, but also lead to gel or agglomeration blocks in the system with melt gear pumps. Such gel or agglomeration blocks will cause serious damage to the final processing, especially for customers who manufacture wires or cables, profiles, cosmetic boxes, thin-walled model products and roller compounds. Especially serious. 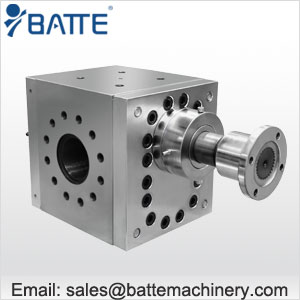 Nowadays, many customers require their rubber processors to produce "ultra-clean" rubber compounds to meet their application needs. To achieve this goal, rubber compounds must be prepared on an extruder/filter. When the processors tried to use the extruder to accomplish this goal, there was a problem. The typical problem is that excessive heat will occur during this process, resulting in scorching of rubber. In addition, the countercurrent in the extruder also makes the extrusion amount drop. A gear pump will be added to the extruder / filter system and its performance will be improved as follows:

1. It has the ability to break through the limits of traditional extruders.

2, accurately control the size and uniformity of the product.

pre：When and why should a melt pump be used?
next：Repair process of spinning metering pump
Inquiry
Please feel free to give your inquiry in the form below. we will reply you quickly!